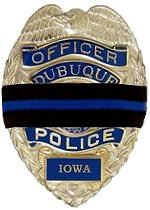 Hundreds of men and women have served the citizens of Dubuque as peace officers since the Dubuque Police Department was formed in 1837, but some of them didn’t make it home at the end of their shifts.

The mourning band is the traditional way for a law enforcement officer to publicly mourn the death of a fellow officer.  The mourning band is eventually removed, but the sacrifice remains.  This page is dedicated to the honor and memory of those who gave everything in their service and protection to Dubuque and its citizens.

It is not how these officers died that made them heroes, it is how they lived.- Vivian Eney, whose quote is engraved on The National Law Enforcement Officers Memorial wall.

Patrolman Daniel Norton was shot and killed after responding to a domestic disturbance at 933 Bluff Street on Wednesday, July 6, 1904.  Norton and Patrolman James Barry responded to the Reed residence after James Reed came home intoxicated and threatened to shoot his baby.  Reed’s wife fled with the baby.  Reed, who was armed with a revolver and a rifle, then barricaded himself in the basement to avoid arrest.

Upon Norton and Barry’s arrival at the residence, they began to proceed down a narrow stairway to arrest Reed.  Reed shot Norton, who died at the scene.  Reed then fled the residence and out into the street, where he was subdued by citizen Frank Gregory.

Reed was convicted of second degree murder and sentenced to life in Anamosa Penitentiary on March 5, 1905. He was pardoned by Governor George W. Clarke on March 26, 1914.

Patrolman Norton was appointed to the Dubuque Police Department on May 2, 1889.  He was survived by wife, Katherine, a son, and a daughter. 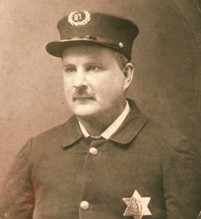 Dubuque Policeman Albert Meissner was working at the Chicago Great Western train depot at about 7:45 P.M. on Thursday, October 1, 1896, when he saw three vagabonds board the second section of freight train No. 62.  Meissner boarded the train and ordered the men off.  They refused and a struggle ensued, causing Meissner to fall on to the track.  Six cars passed over the officer’s body resulting in fatal injuries.

Witnesses relayed the event to the police and the suspects were later arrested in Freeport, Illinois.

Meissner was about forty-eight years of age and left behind a widow and nine children, eight daughters and one son.  He had been appointed to the police force in June 1895.  He was described as an efficient officer and was highly esteemed by all the members of the force.

Captain Raesli of the Dubuque Police Department notified Policeman Frith and Policeman Talcott of the robbery of several citizens on the streets of Dubuque.  He told them to be on the lookout for suspicious persons.

At about 2:15 AM on April 14, 1893, Frith and Talcott located and attempting to remove three vagabonds from a coach car that was in the railroad yard near 19th Street. A violent struggle ensued resulting in broken windows, wrecked seats, and fatal gunfire against Frith and Talcott. Although both officers had guns in their pockets, neither fired a shot. Frith was shot in the neck and back while Talcott was shot in the head.

Two suspects were taken in to custody a short time later. Both were convicted of first degree murder and sentenced to life in prison in the Anamosa State Penitentiary.  On January 10, 1925, Govenor Nathan Kendall pardoned both. A third suspect fled to San Francisco where he boarded a ship bound for Australia and was never captured.