History of the Dubuque PD

Law enforcement in Dubuque began when Philip Moreheiser was named Dubuque’s first marshal and collector of fees and levies on April 1, 1837. By March 3, 1841, with a city government and a charter in place, Dubuque city officials named B.F. Davis the marshal. Troublemakers were held in a jail on the grounds of what is presently Washington Park.

City marshals, aided by a group of city watchmen and other concerned citizens, were often replaced as the result of the election of new city officials. In 1856 Peter Kiene was chosen marshal, but two years later E.R. Shankland occupied the office located in City Hall. Philip Moreheiser returned to the force as the first captain of police. The city was subdivided into three police districts, each supervised by a sergeant.

This organized police force lasted until it was disbanded by the city council in 1859.  Following that action, Thomas Fleming was a marshal in name only. Philip Moreheiser formed a short-lived independent police group called Moreheiser and Associates, which served only those who could afford their services.

Beginning in 1861 the city of Dubuque again witnessed a period of rapid changeover in the marshal’s office. Jacob Swivell was appointed in 1861 and served until the appointment of C.G. Hargus in 1863, who served two years until the appointment of Allen Leathers. Philip Moreheiser returned to duty in 1867. During this term of Moreheiser’s duty, the city council designated the city’s prison to be the east end of the basement in City Hall.

In 1870 Edward Hardee was appointed marshal. In 1873, in addition to Hardee as marshal, Michael Sutton was named captain of police. The uniform to be worn by the members of the police department was the subject of an ordinance passed on February 6, 1873. Specified tailors were selected in the community to make the uniforms, which the officers had to purchase.

F.J. Zugenbuehler was appointed marshal in 1884, Edward Moore was appointed in 1886, and John Raesle replaced him in 1888. In 1888 the city of Dubuque purchased a horse drawn police wagon, which operated out of the fire station at 9th & Iowa Streets.

Samuel Rice was appointed marshal from 1890 to 1894, when he too was replaced by John Raesle. The police patrol station was moved in 1894 to the northeast corner of 13th & Washington Streets. Raesle returned to being captain of the police in 1896 when Edward Morgan was appointed marshal. Raesle left the department in 1898 but returned in 1899 as a patrolman. In 1901 he was once again the captain. During this time, female and juvenile detention facilities were added to the jail. The city’s first police matron was Miss Bridget Brennan. 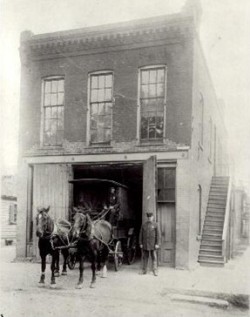 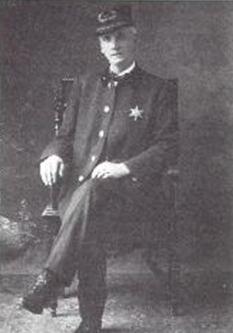 The office of marshal was abolished in 1904 when Thomas Reilly became the first chief of police. That same year, the position of police detective was created. The city’s first two detectives were John Raesle and Thomas Sweeney.

Civil service, first applied to the department in 1907, did not affect the position of chief of police. James Pickley was appointed police chief in 1907 but was replaced by a new mayor in 1911, when Thomas Reilly returned to his former position. Reilly was succeeded in 1913 by John Raesle. The first chief with a long term was John Giellis, who held the position from 1915 until his retirement in 1939.

Upon the retirement of Chief Giellis on January 1, 1939, Detective Joseph Strub was appointed chief of police. Strub retired on February 1, 1952 and was replaced by Hugh Callahan, who remained in the position until March 1, 1960.

Thirty-year veteran Captain Percy Lucas was then appointed chief. He remained in the position until September 1, 1970 when Robert O’Brien replaced him. Robert O’Brien retired late in December of 1984, after 14 years as chief of police.

On May 28, 1985, John Mauss was sworn in as the new chief of police. One of Chief Mauss’s early priorities was to seek accreditation for the department through the Commission on Accreditation for Law Enforcement Agencies (CALEA). This was accomplished in July of 1993. Mauss retired on July 7, 2000, and was replaced by Terry Lambert, Mauss’ assistant chief since 1985, who was named acting chief during the candidate search for a new chief.

Kim Wadding was selected as the chief of police on December 1, 2000, and remained in that position until his retirement on June 20, 2009. In April 2002, Assistant Chief Lambert retired after 37 years with the department. Terry Tobin succeeded him in February 2003. Tobin was named acting chief after Wadding’s retirement, until twenty-year department veteran Mark Dalsing was sworn in as chief on February 1, 2010.

The police department saw many improvements in its equipment during the early 1900’s. By 1907 the city had installed seven police patrol boxes throughout the city. The Gamewell Police Telegraph, a system of eighteen call boxes placed throughout the patrol districts, was added in 1921. Foot patrols were called to the box by a red light and ringing bell.

During the 1920’s, all police department vehicles—consisting of one motorcycle, two cars and a paddy wagon—were all motorized. The rise of violent gangsters in the late 20’s led Chief Geillis to purchase the first of several machine guns in 1932. City Hall employees were startled one afternoon in 1932 when the new weapons were tested in the third floor pistol range.

The rank of police officers at this time could be determined by the uniform. Sergeants, captains and the police chief kept their weapons hidden, while officers wore their firearms outside their coats. The former group indicated their rank by the number of stars on their collars. Over time various ranks have come and gone, including master patrolman, detective and sergeant. The current rank structure from lowest to highest is officer, corporal, lieutenant, captain, assistant chief and chief.

In August 2001 the police department fielded its first K9 unit. Officer Randy Roy was selected as the handler and he and his K9 partner, Iwan, became an integral part of the department. Iwan developed a keen nose for drug detection and was responsible for removing several pounds of illegal drugs from the streets of Dubuque. Iwan consistently placed in the upper echelon in police dog events at the nationwide Police K9 Olympics.

When Iwan was retired, Officer Brian Wullweber was selected to be the department’s K9 handler.  Wullweber received training with the department’s second K9, Doerak, a male Dutch Shepherd that was born in 2003 in Holland.  Doerak was purchased by the Dubuque Police Department from Vohne Liche Kennels in Denver, Indiana and was trained as a dual-purpose narcotic detector dog. He was trained in the detection of marijuana, cocaine, crack cocaine, methamphetamine, and heroin. He was also trained in building searches, area searches, tracking, crowd control, and handler protection. Doerak was retired from service in 2012 and was replaced by Brix, also handled by Wullweber. 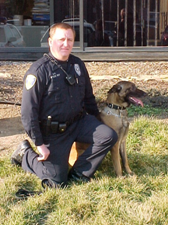 The Dubuque Police Department is always adapting its staffing and law enforcement techniques as well. In 1994 the city committed to implementing the community policing philosophy. Three officers started the program as a foot patrol in the downtown area, which had been identified as an area needing additional police resources. Within the first six months, the officers mounted police mountain bikes as their mode of transportation. After two years an additional officer was added to the unit and two two-officer teams were assigned to the area which covers approximately 140 square blocks on the city’s east side. In 2006 the Dubuque Police Department recognized the need for continued enhancement of the unit. All four of the positions were elevated to the rank of corporal, and the unit was given its own supervisor, a task that was previously assigned to a patrol shift captain as an ancillary duty.

After several years of consideration and a full year of formal study, in September 2002 the department switched its patrol division schedule from five 8-hour workdays to a schedule of four 10-hour workdays. The schedule provides the same coverage as the 8-hour shift throughout the day, and provides additional staffing during the evening hours when the heaviest high impact calls occur. Also, an officer satisfaction survey was completed after the first year and the majority of officers advised they preferred the 10-hour schedule.

In 1996 the Dubuque Police Department formed a Tactical Entry Team, which consists of an assault/entry team, a containment team, marksman-observer team teams, and crisis negotiators. The Tactical Entry Team is responsible for executing high risk warrants, hostage rescue, handling barricaded subjects and VIP protection. In 2010 the department also established a Mobile Field Force to deal with crowd or riot control.

A lack of space and regulations on jail facilities affected both the Dubuque Police Department and the Dubuque County Sheriff’s Office in the early 70’s. The old county jail, now a historical building located across the street from the current building, was deemed uninhabitable by state inspectors. Both agencies had also expanded their staffs to levels that exceeded their facilities. A new law enforcement center was approved and built at 770 Iowa street. The police department left its offices in City Hall in 1974, moving to its new headquarters in the Dubuque Law Enforcement Center (DLEC). This move brought the Dubuque Police Department, the Dubuque County Sheriff’s Office, and the Joint Communications Center under one roof. At first, the police, sheriff and fire departments had separate dispatchers, often on-duty officers. Eventually this was transitioned to full time professional dispatchers capable of dispatching for any of the agencies. In 1997 the agencies switched to an 800 MHz trunking radio system, which provided better coverage throughout the county, and allowed the agencies to communicate directly with one another, which they had never able to do before.

In the fall of 2000, the people of Dubuque County approved a local option sales tax to fund the construction of a new jail and related facilities. In late 2001, construction was started on the facility, and after many delays, the Criminal Investigation Divisions of the Dubuque Police Department and Dubuque County Sheriff’s Office, along with the joint records room, moved into the new building at 855 Central in early 2004. The jail opened in April 2004, and the first floor CID units took up residence at the same time. The completion of the new building freed up space in the original building. The area formally occupied by CID was remodeled into a new shift commander’s office, patrol work area, line-up room, and staff offices.

At it’s September 17, 2012 meeting, the Dubuque City Council declared the week of September 23-29, 2012 as Dubuque Police Department 175th Anniversary Week. Read the 175th Anniversary Proclamation or watch a video of the DPD Honor Guard presenting the colors and the mayor’s reading of the proclamation.

The public was invited to attend a reception to celebrate the police department’s 175th anniversary. The reception was held at the Grand River Center from noon until 4:00 p.m. on Saturday, September 29, 2012. Admission was free and there were displays detailing 175 years of history, including badges, guns, uniforms, and vehicles. There were also displays related to numerous aspects of the police department, including the Patrol Division, the Criminal Investigations Division, the Community Policing Division, the Tactical Entry Team, the Mobile Field Force, the Dubuque Police Auxiliary, and police chaplains.  Click here to watch a video from the event.

In 2011 the Dubuque Police Department’s Historical Committee and Intern Liz Sedgwick compiled photographs dating back to the 1800s from numerous sources, including retired officers or their families and the Dubuque Telegraph Herald. Those photographs were then converted to a digital format and organized by decade.

Sedgwick, a Graphic Arts major from the University of Wisconsin-Platteville, used editing and publishing software to create a historical book that graphically represents the Dubuque Police Department from 1837 to 2012. 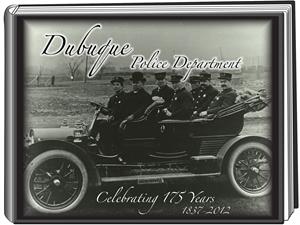