The creek becomes a storm sewer and then, a creek, once again.

Originally the lower part of Couler Valley or Couler Village was known as Langworthy Hollow, an area that had its focal point at Kaufman Avenue and 22nd Street. The origin of the name "Couler" is undetermined. A possible source is the French word "couler", a verb with one meaning being to cast metal. This explanation fits well with the smelting of lead ore, which was the original industrial use of the valley. The term Couler Village was in use prior to the 1850s.

The origin of the "Bee Branch" replacement name for Couler Creek is undetermined. It was already in use by 1863, but it most likely developed in reference to one of the creek's lower tributaries. The branch name finally supplemented the whole, as a branch sewer line became the prototype for the whole new storm sewer system.

Two topographical fates confronted Dubuque's residential growth. There was precious little level land that was easy to get to. There were high elevations on three sides of the growing city. When it rained hard, the runoff hit the city hard. Those living near drainages learned to not live near drainages. As the image on the right shows, even paved streets could be completely washed out.
The 1872 aerial drawing of North Dubuque starkly depicts the obstacle to house building that the creek and its floodplain presented. The creek is clearly shown as it the broad uninhabited area along its course. The open land most certainly supported gardens as well as dumping places, but nobody was foolish enough to build anywhere near it. The natural creek followed Elm Street south to Sanford (now 24th) Street, and then its course lay west of Prince Street. Near Lincoln Avenue it began a southeasterly course that emptied into Lake Peosta and then into the nearby Mississippi River.
The year 1885 was the year of enhanced area growth when the Dubuque and Northwestern Railroad acquired its right-of-way along Elm Street and Couler Creek. The valley's residential growth was also aided by the provision of sanitary sewers and electrified streetcar service, the latter improvement appearing in 1890. An obstacle to travel and street extensions were the massive Chicago, Milwaukee and St. Paul Railroad yards.

Spectacular floods occurred in September 1873, July 1876, October 1878, and June 1880. By 1882, the undeveloped industrial sites near the creek were being developed. The Council was being pressured to open up connective streets like High Street, between Johnson and Kniest streets. Residents wanted bridges across the creek at numerous points. The creek and muddy unpaved streets famously stalled a fire engine for two hours in mid-1883 along Sanford St. The flood of 1889 continued the decade's pattern of severe flooding. Couler Avenue itself was closed off. Residents called for additional trenching of Couler Avenue as a supplementary drainage.

The first substantially subscribed petition to challenge the City to deal with the Couler Creek flood problem was submitted in mid-1893, and was signed by 50 citizens. The petitioners challenged the Council, "to order the construction of such sewers and laterals as…may be necessary to properly drain said Couler Valley and carry off all the storm water, and prevent the accumulation of stagnant water which has become a nuisance in that locality and injurious to the health of our families" (Petition, July 1893, Council Proceedings). Others, constituting a "Committee for themselves and other property owners" offered a similar petition in mid-1896.The petitioners gave notice that if nothing was done, "we will endeavor to hold the City responsible for all future damages caused by its neglect." 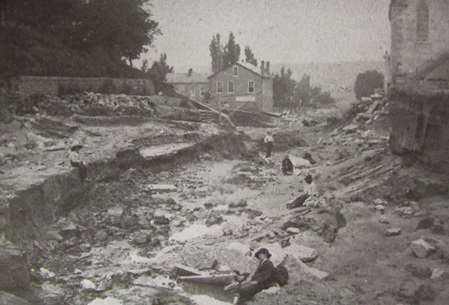 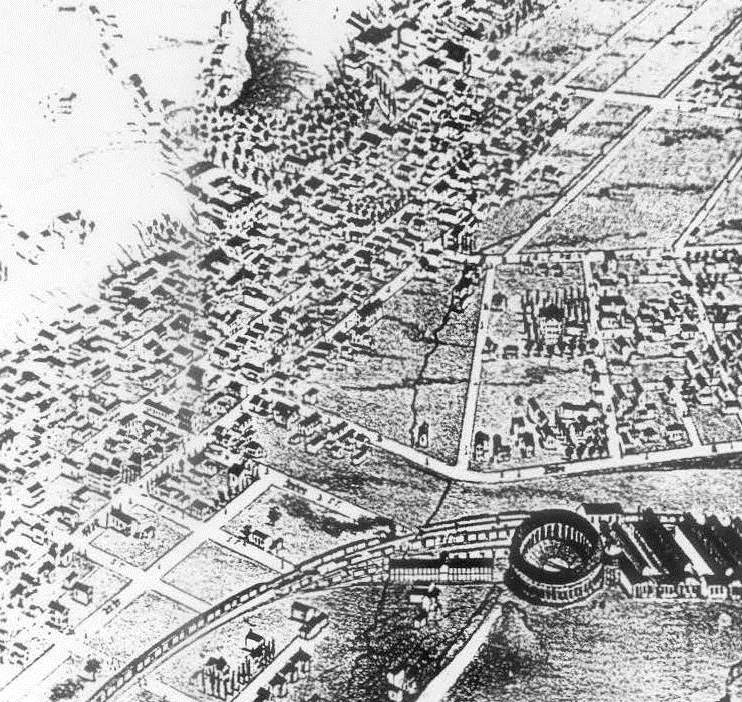 Birds Eye View of Dubuque 1872, Augustus Koch
Another neighborhood change was the opening of the massive Dubuque Malting and Brewing Company plant, at 27th and Jackson streets. The building was in operation by early May 1896. The brewery naturally used the creek as a waste dump and the natural storm sewer became an sewer. The expansion of city residences ever northward and additional street paving also further exacerbated valley flooding. The 1896 flood, in late May, played havoc with the newly-paved Kaufman Avenue. Eagle Point Avenue was the deposition place of choice for all things flotsam. The Herald reported in June 1896 as follows:

Fences, sidewalks and approaches were washed down Eagle Point avenue in a promiscuous manner. Much of the debris was deposited on
East Eagle Point avenue between White and Kniest streets where hundreds of yards of macadam were deposited while the tons of mud were
deposited partly on White, Jackson, Washington, Kniest and Couler avenue."

The godfather of the Bee Branch was 5th Ward Alderman Charles T. Thomas. The Herald credited Thomas for laboring "energetically to remedy the drainage conditions that make possible the periodic overflow in the Couler Valley…" If re-elected the newspaper predicted that Alderman Thomas would "work a solution of this vexing problem within the next year" (Dubuque Herald, April 3, 1898). An advantage of a buried storm sewer along Elm Street was that Elm Street could be widened over the former creek bed allowing room to double the tracks of the Chicago Great Western Railroad which used part of that street. The doubling of the line reflected the growing importance of that railroad. Soon it would have its own yard and shops located in the north end of the Couler Valley.

At the end of 1898 the City Council's hired an "outside engineer," J. H. Blake to prepare a new storm sewer plan. Couler Creek was determined to remind the City of the problem it posed. In late June 1899, what was said to be the heaviest rain storm in years, struck the north part of city. As usual, the Couler creek rose in its banks and considerable damage was done. Mr. Boyce's design was awarded $20,000 but negligible actual work was accomplished in 1899. The needed right-of-way had to acquired.

The original sewer map, shown on the right, contrasts the original creek course with the straighter storm sewer pathway. The Kniest Street storm sewer is also shown, and it entered into the new sewer near the Chicago, Milwaukee, & St. Paul tracks.

The railroad was a partner in the storm sewer construction because its yards straddled the creek's course. The railroad had built its own culverts and bridges overtime and when the City Council acted to do its construction work, the two parties found themselves at odds, with differing needs, priorities, time schedules and worst of all grades. By the spring of 1901, $13,888 of the initial $20,000 Bee Branch appropriation had been expended. Work proceeded slowly and a year later, just $16,000 had been paid out and the storm sewer extended to 24th Street. 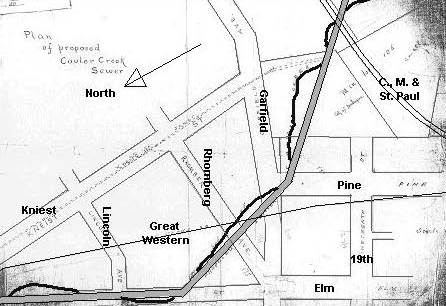 Original Bee Branch sewer plan, undated, ca. 1900, enhanced for clarity
By the end of 1902, it was the turn for the Chicago Great Western Railway to impede completion of the storm sewer. There was a gap in the storm sewer where the railroad owned a parcel between Rhomberg and Garfield Avenues. The railroad required a heavier sewer construction under its tracks. The City was able to gets its way because the railroad franchise was up for renewal. A new ordinance finalized in early 1903 placed the storm sewer under Elm Street, allowed for the railroad's second rail line, and pledged that the City would continue the northward extension of the storm sewer. The railroad would build the Elm Street sewer, with all of the pledged work being complete by the latter part of 1905.

"The North End is Booming"

With the final "downstream" improvements, the last vacant wetlands could finally be developed. The Dubuque enterprise celebrated this fact and measured its positive impact on the neighborhood in early 1905, stating:

[The] Bee branch sewer is one of the best, most practical and most warranted public improvements that the city has made. When the Eleventh street wall was projected there was a roar from those who can't see any more than a week ahead. The result of that improvement, though, is the building up of the hill district, the expenditure of thousands of dollars in the improvement of property and that part of the city is indeed creditable and a pride.

For years the Couler Valley has been a bug bear. Every storm meant the flooding of property and the streets. Cellars and cisterns were filled up and the value of property was materially effected, with the result that there were eyesores all the way up the valley from Rhomberg Avenue to the Peru Road. The sewer will carry off the storm water, and when its efficacy is demonstrated, the people will be encouraged to improve their property. No section the city has been built up so rapidly in the last ten years is the northern part, and much of the building has been in the Couler Valley. Where there were cornfields and garden patches ten years ago, there are solid blocks of residences today. The factories in that part of the city make it a desirable residence section, and there are hundreds of available lots that will be on the market for building purposes when it is assured that the people will be protected from the storm freshets (Dubuque Enterprise, February 25, 1905).


Another advantage of burying the creek was that street grades, curbing and pavement near the new storm sewer could finally be permanently improved. Beginning in late 1900 municipal bonds paid for substantial work on, Sanford Street, Prince Street and the alley linking Johnson and Kniest streets. Industrial growth in the Couler Valley increasingly drove residential development in an age when workers' homes tended to cluster around the respective places of employment. In mid-1906 the Telegraph-Herald reported, "the North End is booming." For the first time the ward was described as a place of beauty with the building of many "beautiful" homes. It was observed that "more dwellings have been erected there the past year than for many years preceding."

The original Couler Creek or Bee Branch upstream drainage remained open as late as 1915, at which times its banks were rip rapped with stone. This portion of the storm sewer wasn't finally covered until the late 1920s. The south end of the storm sewer was located at 15th and Sycamore streets as of 1935 and its southward extension was not constructed until 1949.

Fast forward, and the Couler Valley was once again experiencing ongoing flooding problems. Heavy rains came in 1999, 2002, 2004, 2008, 2010 and July of 2011. Six Presidential Disaster Declarations were issued with total damage estimates of almost $70 million.

Following the storm of 1999, the City expended $275,000 for an engineering study focused on the 100-year flood area. It was determined that a lack of sufficient downstream capacity on the part of the storm sewer resulted in an overwhelmed drainage system. As a result, over 1,500 homes and businesses were at risk of flooding during heavy rain events. The optimal solution consisted of the construction of upstream detention basins and the transformation of the underground historic Bee Branch sewer, south of 24th Street, into an open drainage that discharged into the existing 16th Street Detention Basin. 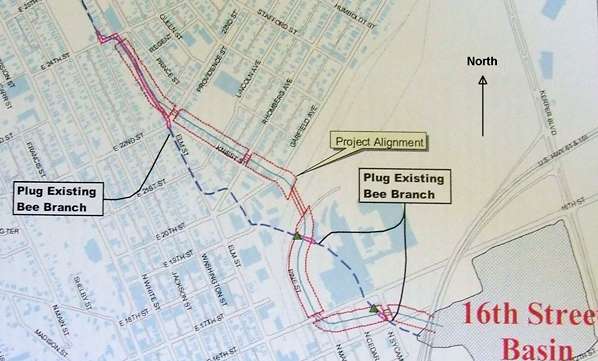 That open drainage is now the Bee Branch Creek Greenway, designed to convey stormwater but also to serve as an asset to the community. Click here for more information about the Bee Branch Watershed Flood Mitigation Project, and the history of the creek restoration.
Bee Branch Creek Restoration Alignment Summary Map, Fall 2001
Report a Concern
Make a Payment
Contact Us
Notify Me®
[]