Since January 2013, the City had several positive meetings and on-going discussions with the Iowa Department of Transportation (Iowa DOT) regarding the potential Transfer of Jurisdiction (TOJ) for the continued development and advancement of the Southwest Arterial. The on-going collaborative discussions resulted in the Iowa DOT preparing a Memorandum of Understanding (MOU) between the City and the State.

Due to the monumental and historic significance of executing the Memorandum of Understanding for the Southwest Arterial Project, the City in partnership with the Iowa Department of Transportation held a Signing Ceremony and Reception on August 9, 2013.

Click on the image to the right to enlarge the map of the US 52 Redesignation. 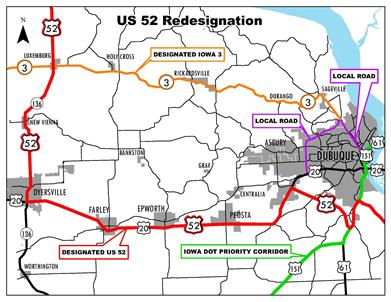 The Iowa DOT proposes to re-route a portion of U.S. 52 in Dubuque County; and

The City hereby agrees to continue as the lead agency for the development and advancement of the Southwest   Arterial and will be responsible for the completion the following project improvements:

The Iowa DOT will take over as lead agency for the completion of the Southwest Arterial upon the City completing said improvements as outlined above.